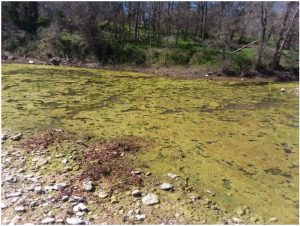 As you may remember, the Long Branch permit plans to dump 92,000 gallons/day of treated sewage into a tributary into Barton Creek, which is the same as dumping three standard sized pools (20 ft by 40 ft) filled with wastewater into the creek every day.  SBCA is concerned about this permit because new research indicates that miles of Barton Creek would experience an increase in algae growth from the excess nutrients found in the effluent water.

Recently, we spoke to Spectrum News Austin about how the permit will have negative ecological impacts on Barton Creek and how residents can protect their waterways. Our executive director, Angela Richter, emphasized how the permit will cause excess algae in Barton Creek, which will ruin the appearance, recreational value, wildlife habitat, and water quality of the creek. Check out the news article here.

If you are concerned about the Long Branch permit, please show your support by 1) signing the No Dumping Sewage petition and (2) writing a comment to TCEQ about your concerns (Permit No. WQ0015594001), and ask TCEQ to reject the Long Branch wastewater permit to protect Barton Creek. If your community group wants SBCA to give a presentation about the permit, please email Angela Richter at angela@savebartoncreek.org.  Let’s come together for a healthier Austin! 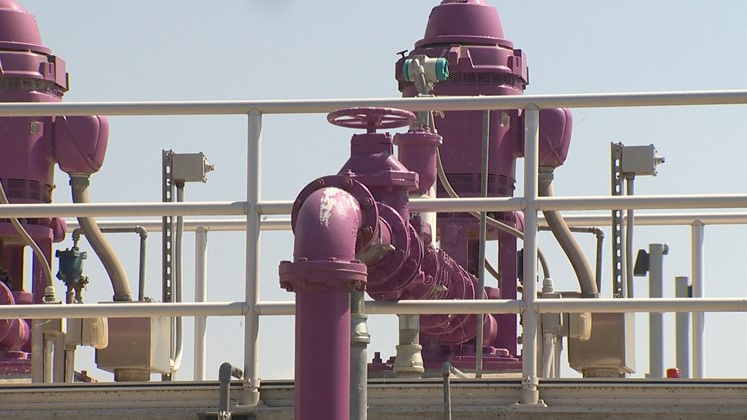 With population growth, many cities are resorting to dumping treated sewage into waterways, which communities depend on for drinking water, recreational use and habitats for aquatic species.  Texas allows treatment plants to pollute our waters, but cities are choosing better ways to manage their wastewater that protects waterways and saves them money. One city in Texas, Marble Falls, implemented an innovative solution to address the increasing demand for water and manage wastewater.

Nearly 10 years ago, Marble Falls began a recycling effort to address years of drought and growth concerns.  The city manager, Mike Hodge, refers to the water-saving solution as the purple pipe system. Unlike other Texas cities, Marble Falls reuses treated wastewater to irrigate their park systems. Instead of building another wastewater treatment plant, the City saved money by using 15 million gallons of wastewater in the first year and continues to use the purple pipe system to water parks.

The Wimberly Independent School District (WISD) created and implemented a new school, the first Texan One Water Campus, that will use One Water strategies to use 90% less of groundwater from the Trinity Aquifer compared to traditional construction standards. The construction of the new school will reuse rainwater, HVAC condensate and wastewater treatment to reduce the usage of groundwater. The new and innovative One Water primary school, located at the Wimberley Valley on Ranch Road 12 and Winters Mill Parkway, had its groundbreaking ceremony on July 29th, 2019.

One Water is a water management and planning technique that views water in as a an interconnected resource that travels through and is used by a community. Through collaboration with stakeholders, One Water strives to utilize water in the most effective and efficient as possible. WISD created the One Water primary school by collaborating with various local entities such as the Wimberley Valley Watershed Association, The Meadows Center for Water and the Environment at Texas State University.

The design of the school highlights the importance of protecting Wimberley’s sensitive water resources, such as Jacob’s Well, by managing all the water as a single resource in a sustainable and reusable way throughout the construction and operation processes.  The One Water primary school encompasses the importance of  conservation of natural resources, green stormwater infrastructure, open space preservation and education in our communities.

Save Barton Creek Association, Fix 290, Save Oak Hill, South Windmill Run Neighborhood Association, Clean Water Action, and resident landowners represent the plaintiffs in a new lawsuit filed against the Texas Department of Transportation (TxDOT) and the Capitol Area Metropolitan Planning Organization (CAMPO) in relation to the Oak Hill Parkway construction project planned at the “Y” in Oak Hill. Together, these groups have filed ‘Pro Se’, or without a lawyer.

The plaintiffs do not wish to stop this project altogether, instead they are urging TxDOT to improve the project and avoid both litigation and delays caused by construction. The planned excavation for the highway will encounter caves due to the project’s location on the karstic Barton Springs Edwards Aquifer, and this will cause project delays as well as environmental destruction. For years, the community in Oak Hill has requested a grade level parkway that would be quicker, less expensive, and less destructive to build than the proposed elevated and excavated highway project.

Fix 290 formed in 2006 as a coalition of several “associations, business, and concerned citizens” who opposed TxDOT’s plans for “an elevated tolled expressway through the heart of the Oak Hill community” and sought an alternative. This new lawsuit describes how Fix290 members consistently advocated for a ground level parkway since that time, which they say TxDOT never seriously considered.

Plaintiff Save Oak Hill “formed to gather data related to the natural, cultural, and historic resources in Oak Hill.” This organization documented the locations, species, and natural history of heritage trees in the area and commissioned a historic preservation survey to identify important community landmarks.

The suit lists several flaws with TxDOTs environmental review process. This is consistent with an analysis undertaken by a national expert lawyer that SBCA commissioned earlier this year. The attorney contended that TxDOT did not adequately account for significant alterations in the project plans, including the change from a toll road to non-toll road in their modeling and design.

Following the EIS issued in December 2018, TxDOT has continued to make changes to the project design, such as changing the number of lanes, flood risk modeling, and location of a shared-use path. “To say the Oak Hill Parkway has changed is an understatement,” says Carol Cespedes from Fix 290. To address their concerns, the groups seek a mandatory court supervised mediation and settlement with TxDOT for revisions to speed up the project and lessen impacts.

“We are asking TxDOT to sit down with us and work together to implement a project design that meets the needs of the Oak Hill community and protects our environment,” says Angela Richter, Executive Director of Save Barton Creek Association.