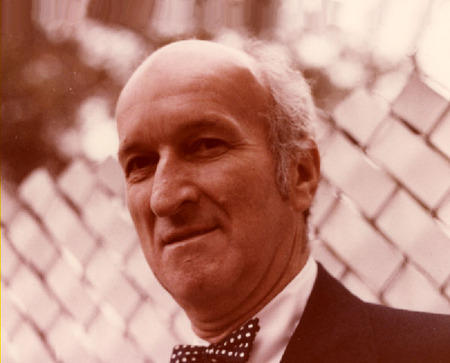 Besides being a dear brother-in-law to our long-time Treasurer Shudde Fath, Creekmore Fath was an important force in Democratic politics in Central Texas and at the national stage for over 70 years. His memorial service will be held this Thursday morning, 11:00am at the Weed-Corley-Fish Funeral Home at 3125 North Lamar Blvd. Creekmore was a great friend to the Association and to Austin and I’d encourage everyone to attend and pay their respects.

http://www.wcfish.com/_mgxroot/page_10780.php?id=684038 Creekmore W. Fath died peacefully at his home in Austin on June 25, 2009 at age 93. He was born in Oklahoma on May 1, 1916 to Conrad F. Fath and Minnie Creekmore West Fath. He grew up in Cisco and Fort Worth, Texas before moving to Austin in 1931. In 1933, he graduated from Austin High School, where his debate partner was John Henry Faulk. He attended the University of Texas College of Liberal Arts and School of Law. At UT, he was in the select group of students mentored by renowned economics professor Dr. Bob Montgomery. He was licensed to practice law in 1939 and opened an Austin practice with future US Congressman Bob Eckhardt and future District Judge Mace Thurman. In September 1940, he moved to Washington, DC to serve as Acting Counsel to the US House of Representatives Tolan Committee’s Special Committee to Investigate the Interstate Migration of Destitute Citizens. Next, he served as Counsel to the Special Committee to Investigate National Defense Migration. He then served as Counsel to the President’s Advisory Commission on the St. Lawrence Seaway and Power Project. In January 1942, he became General Counsel to the US Senate Committee on Patents investigating German cartels with American corporations. His work there attracted the attention of President Franklin D. Roosevelt, who on June 14, 1943 called Creekmore to the White House for advice concerning American Cyanamid’s trade contract with Mexico. He then became Assistant General Counsel of the Board of Economic Warfare (where Dr. Montgomery served during WWII). In 1943, he was drafted into the US Army and later assigned to the Office of Strategic Services (OSS) where he served until the end of WWII. During this time, he was involved in sending coded messages from the President to commanders and allies in the field. In 1945, he became Associate General Counsel of the Office of War Mobilization and Reconversion. On April 15, 1946, he became Special Assistant to Secretary of the Interior J. A. (Cap) Krug. On February 15, 1947, he resigned from the Department of Interior in order to become Executive Assistant to Executive Director Gael Sullivan at the Democratic National Committee. On April 25, 1947 he married Adele Hay Byrne, daughter of Clarence and Alice Appleton Hay and granddaughter of John Hay, Aide to President Lincoln and later US Secretary of State. In August 1947, Creekmore resigned the DNC post so that he and Adele could move to Austin. On September 1, 1947, Creekmore opened an office in the Littlefield Building where he practiced law and became active in Texas Democratic politics. In 1948, he made an unsuccessful run for US Congress as an FDR Democrat. On March 24, 1949, Austin Mayor Tom Miller and Vice-Chairman Creekmore Fath organized a large Democratic Party dinner and fundraiser with House Speaker Sam Rayburn as principal speaker. They later co-chaired Adlai Stevenson’s Texas campaigns. During the Fifties, Creekmore and Frankie Randolph, among others, organized the Democrats of Texas and were the liberal opposition to Allan Shivers, Lyndon Johnson and John Connally’s rule of the Texas Democratic Party. In 1960, Creekmore was again in Washington as Counsel to the Senate Commerce Committee’s freedom of information sub-committee. It acted as a watchdog on the radio-TV industry’s requirements for giving equal time to political candidates. This sub-committee later published the complete text of the Kennedy-Nixon debates. Creekmore was an active ally and advisor of Ralph Yarborough during his campaigns for Governor and US Senate. In 1968, he was Treasurer of the Don Yarbrough Gubernatorial Campaign. On December 15, 1970, he served as general chairman and toastmaster for a Texas Appreciation Dinner honoring US Senator Ralph W. Yarborough. In 1972 and 1974, he served as state campaign manager for Frances (Sissy) Farenthold and helped to end the political careers of Preston Smith and Ben Barnes. In 1969, 1979, and 1990, the University of Texas Press published editions of The Lithographs of Thomas Hart Benton, compiled and edited by Creekmore Fath. He owned the most complete private collection of Benton lithographs, and his collection was exhibited at several museums and galleries. Creekmore and Adele were life-long collectors of art, and their collection was shown at various galleries. Creekmore was a long-time member of the Liberal Arts Foundation Advisory Council at the University of Texas. In 2002, he and two professors received Pro Bene Meritis awards from the College of Liberal Arts. In 2001, he and Adele donated approximately $12 million to the University of Texas. They were also generous donors to political campaigns and to many non-profits. He was preceded in death by his parents, wife Adele in 2007, and older brother Conrad in 1990. He is survived by his stepdaughter, Moyra Byrne, of Washington DC, his sister-in-law, Shudde Bess Bryson Fath of Austin, and her daughter Betsy Fath Hiller of Milam County. A memorial service will be held at 11:00 a.m. on Thursday, July 9, 2009 at Weed-Corley-Fish Funeral Home, North Lamar location. In lieu of flowers, contributions may be made to The Creekmore and Adele Fath Charitable Foundation, 502 W. 13th Street, Austin, Texas 78701 or to one’s own chosen benevolence.